(A special thank you to Michael Dawe for this historical summary) 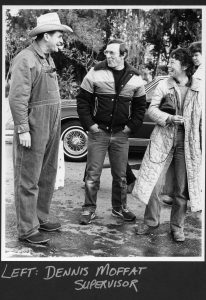 Every Saturday morning, from the May long weekend to Thanksgiving, one of Red Deer’s most popular public events springs to life. It is the weekly Red Deer Public (Farmers’) Market.

The Market is a commercial venue for fresh produce and a great array of other goods, services and entertainments. However, it is much more than that. It is a true community cultural and social event.

Hence people gather at tables, set up by the food vendors, for hot coffee, food and friendship. Others sit to rest their feet and “people watch”. Most stroll leisurely amongst the stalls and canopies to see what is on offer this week and to bump into family and friends.

The very first public market was started in Red Deer in 1906, not
long after the community was incorporated as a town. This 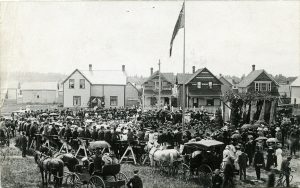 market operated on the large open public square, immediately west of the Fire Hall/Town Offices, where City Hall Park is located today. Sometimes in inclement weather, the Rink on the corner of Morrison (52) Street and Nanton (48) Avenue was used.

Unfortunately, this pioneer public market did not survive the tough economic years that followed the First World War. However, in the early 1970’s, an energetic young high school art teacher and City councilor, Dennis Moffat was struck with the idea of starting a farmers’ market in Red Deer while relaxing in a canoe while on vacation in Northwestern Ontario. 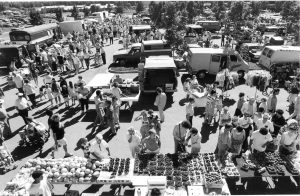 When he got home, he pitched the idea to the mayor. He was told that the idea had failed in the past and was unlikely to succeed now. However, he was also told that if he would like to give the idea a try, to go ahead. Moreover, he was offered a location at Anniversary Square in front of the grandstand on the old Red Deer Exhibition Grounds.

Thus, the first Red Deer Farmers’ Market was organized. It was originally an all-day event, but was only staged in the fall. Although, there were only 18 vendors at the first Market, it proved to be a great success. 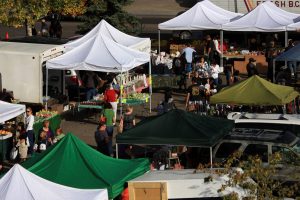 site on the southern edge of the City. The Farmers’ Market also relocated. It briefly operated on Ross Street, with the traffic being temporarily closed for the morning. Even more briefly, it moved to a site near the old C.P.R. station.

The Farmers’ Market then moved to a parking lot of 49 Avenue and 49 Street, immediately east of the Hudson’s Bay department store. Over the next five years, the Market continued to grow and diversify.

In 1987, the Market moved back to a spot in front of the Red Deer Arena, very close to its original location. In 2000, because of the incredible diversity of food, merchandise and services offered, the Provincial Government ruled that Red Deer could no longer be considered a “farmers’ market.” Instead, it was officially, designated a public market. 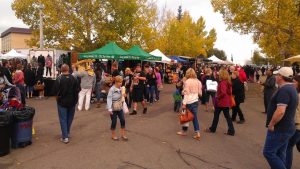 With the demolition of the old Arena and the construction of a new one, in 2016, the Market moved to a new site in front of the Memorial Centre, by the Lindsay Thurber, Camille J. Lerouge and Gateway Christian schools.

Ever since its founding, Dennis Moffat has felt that one of the Market’s greatest strengths is its diversity of vendors and activities. The past decade has proven him right. The incredible popularity of the Red Deer Public Market keeps increasing.

Hence, Red Deer enjoys one of the large and most popular public markets in the Province of Alberta if not in all of Canada. It is an achievement to be celebrated as the Red Deer Public Market commences a new season for years to come.

We're currently offline. Send us an email and we'll get back to you, asap.